So I guess I've been having a little too much fun in my classroom to think about blogging lately, and I feel pretty good about that. It's been a really great year so far. There's something about the second time around that makes it feel so much easier.

This is a little experiment that we tried in my classroom as we were talking about plants in the fall. I had seen this idea floating around the internet in several different places, and decided to give it a try.

After we talked about the life cycle of a pumpkin, we opened up my pumpkin to take a look at all the seeds and meat inside. I asked my class to make a prediction (or a hypothesis) about whether or not the seeds inside the pumpkin could grow if we just added dirt and water. Most of my class was pretty skeptical, and thought that the seeds would not grow inside the pumpkin. I'll admit, I was unsure myself of how successful this experiment would be.

But we came back after a long weekend to a fun surprise... 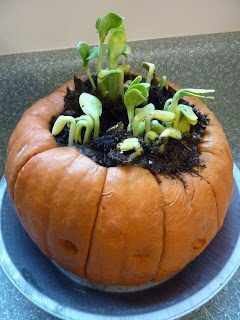 Pumpkin sprouts! The class was ecstatic- they were so excited. Every day this week they run over to check on it first thing in the morning to see how much taller the sprouts are getting. 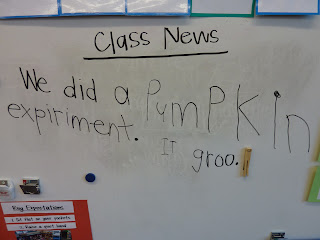 The pumpkin itself is getting pretty rotten, so I don't know how much longer I'll let the sprouts grow in my classroom. But it has been fun for everyone to watch it grow this week!
Posted by Sara at 3:06 PM

Email ThisBlogThis!Share to TwitterShare to FacebookShare to Pinterest
Labels: Science

I am a Utah teacher, currently learning in the wonderful world of Kindergarten.